On Sunday the 5th March the Branch held its Annual Lunch, the venue again this year was The Sandford Springs Golf Club Kingsclere Hants. The attendance was around 70 which included members from our sister branches of Oxford and Andover. 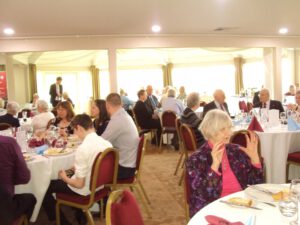 We were again privileged to have Lt Col Gerrit Pijpiers OBE of the Royal Netherlands Air force and his wife Johanna as our guest and awards presenter. Lt Col Pijpers was awarded his OBE in 2003 for his outstanding… work to the commemoration services at Oosterbeek. He has also written books on the history of the 11th Battalion the Parachute Regiment and continues to visit and keep in touch with the survivors of that Battalion.

Due to a lucky encounter with Ron Webster from the Grimsby and Cleethorpes Branch whilst on a Ride To The Wall event we were also privileged to have as our guest John and Biddy Tarrant. 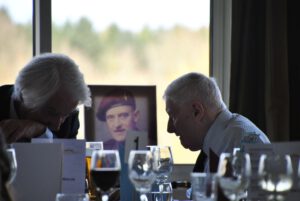 John is the nephew of Major Reginald Tarrant MC who served with B Coy the 13th Battalion Parachute Regiment during the Normandy offensive as did our own Jim Beasant. It transpired that on the 19 August 1944 Maj Tarrant was Jim OC when they attacked Hill 13 at Putot en Auge, during that action Maj Tarrant was wounded and subsequently died of those wounds and Jim was wounded by a grenade and captured on the same day.

John had been doing some very extensive family research into his Uncle Reggie and had always wanted to speak to some one who had served with him, but due to the time lapse had almost given up hope of that happening, but due to Biddy’s chance encounter that was finally achieved. To say it was an emotional occasion would be an understatement because I was starting to think we were going to have to have a whip round to keep Biddy supplied in tissues.
Anyone wishing to read more on Maj Tarrants action can follow the links at https://paradata.org.uk/people/reginald-m-tarrant and here https://paradata.org.uk/article/2667/related/55414
and Jims part is taken from the book , 13 – Lucky For Some by Andrew Woolhouse.

There were also 3 presentations made at the event,

The Sid Dewey Annual Memorial Trophy for Exceptional Service to the Branch was awarded to Paul Blissett. 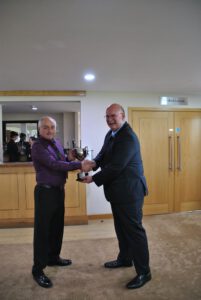 On a nomination from the Branch The PRA Medal for outstanding service was awarded to Malcolm Rowlands our Branch Secretary for the last 11 years.

The 3rd was a presentation to Lt Col Pijpers by Graham Whelan from both the Oxford and West Berks Branches in recognition of his work in the fostering of continued Friendship and Bounds between the Dutch people and Airborne Forces.

The Branch used this as an opportunity to raise funds for #TeamBreya. 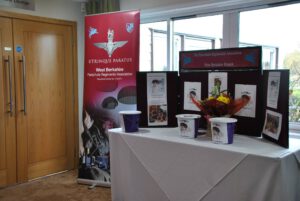