A widow whose husband died during the Battle Of Goose Green has returned triumphant from an emotional first visit to the Falkland Islands.

“My husband was quite an amazing man. We met and got married very quickly when we were 19. He was was totally Paratrooper through and through.”

LCpl Bingley was killed during the Battle Of Goose Green in May 1982. He was section leader in D-Company with 2 PARA and posthumously received the Military Medal for storming an Argentine machine gun nest during the Falklands War. The citation published in the London Gazette explains his bravery:

“His heroic action enabled his company to continue their advance and was significantly instrumental in defeating the enemy.”

Jay walked in the area where he died and retraced his steps. The yomp was not only for her husband but also in support of two great causes, the Falklands Veterans Foundation and Combat Stress.

“I’ve always admired what everybody did in the Falklands. My admiration having walked that walk has gone up tenfold. You really see what they were up against.”

The self-described war widow living with PTSD explained to Jay James in November that this cause is very close to her heart. In the past, she has spoken about the number of veterans who commit suicide, sometimes many years after they leave service.

“I know a few guys that have gone through Combat Stress and had some really good results from them.”

Listen to the full November interview below.

Jay left the UK on November 19 heading to the Falkland Islands via Cape Verde. Before she headed off, Jay explained why she wanted to take on the challenge.

“In the last 35 years I’ve not been to the Falklands… I’m going to be walking in my husband’s last steps before he died, from Sussex Mountain to Goose Green.

“I’m also going to be tabbing in honour of both 2 and 3 PARA across Mount Longdon and then into Port Stanley, part of that journey will be the steps that Gary didn’t get to do.” 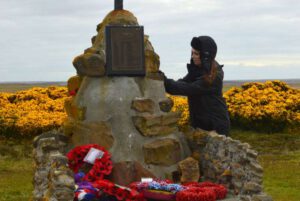 Black & White Falklands War Image: Men of 2 PARA wait on board the ferry NORLAND before the landings at San Carlos in the Falkland Islands, 20 May 1982 / Imperial War Museum