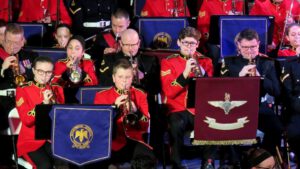 The Brentwood Imperial Youth Band was formed in 1990 and is an independent charity. They are very proud of their Alumni and in particular those who go into the Military, whether as musicians or in other specialist fields. They were extremely fortunate to have been able to repeat their 2017 workshop & concert with The Para Band and that was primarily due to the Bandmaster, Jon Rockey’s enthusiasm and energy in making it so.

On Sunday 11th March, The Band of The Parachute Regiment spent their Mothers Day with The Brentwood Imperial Youth Band at their band room on the old Warley Barracks site, in Brentwood – giving a combined sum of 107 musicians, with an age range from 10yrs to a good age! The two bands spent the day working on music, broke bread (a finger buffet, pizza and hundreds of fairy cakes) and performed to a full-house audience in the evening. The event raised an outstanding £1744.50 for The Parachute Regimental Association. 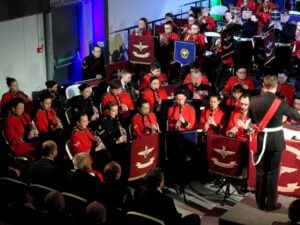 Following his attendance at the 2017 Chris Eubank Snr, it was a great surprise to receive a note from Chris Eubank Snr ahead of the 2018 concert earlier this month. Explaining and apologising for his absence due to a fixture clash, Mr Eubank Snr sent a pair of signed boxing gloves along with a message of good luck. The Band Drum-Majors duly obliged the photo call. 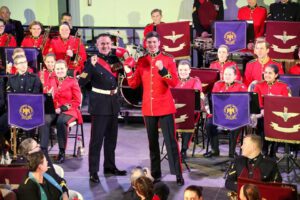 Eastney was home to the Royal Marine Corps Division HQ until 1995 when the formidable barrack buildings were sold for redevelopment into residential housing. Legend has it that two ghosts resided at Eastney Barracks – one of a young girl and the other of a heart-broken Colonel Wolf. Please click on the link below to hear the two bands in action: 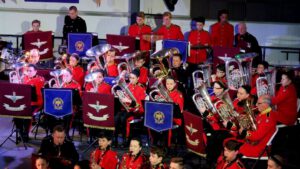