Without releasing too much footage here is the 2000 sq ft Union Flag in all its Glory, flown by Cpl French.

Such an incredible honour to fly the Union Flag

side by side with the Flag of the United States, the Stars & Stripes 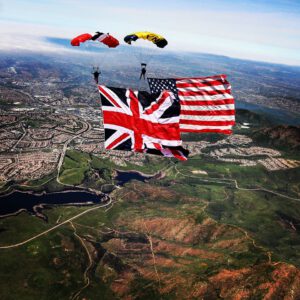 A rare opportunity for members of the British Army & The Parachute Regiment to showcase their skill set alongside our American counterparts the U.S. Navy Parachute Team “The Leap Frogs” at Skydive San Diego