Former Paratrooper Raymond Pickles, has recently celebrated his 90th birthday. Last year he posted  photograph of himself and four friends on Facebook, taken in somewhere between 1945-1948. He is hoping to track down anyone who served at that time. Below is an extract from Raymonds letter:

I was posted to HQ PARA in 1945 which was based at Alderbury, near Salisbury. I remember the Chief Clerk was a Warrant Officer called Askey. It was set in a large house in beautiful country. I believe we moved to Aldershot in 1947. 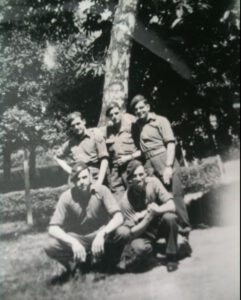 The details of the photograph are vague. Back Row: John Brown, Raymond Pickles, Not Known

If anyone can help Raymond with this quest please get in touch at: raypickles@blueyonder.co.uk