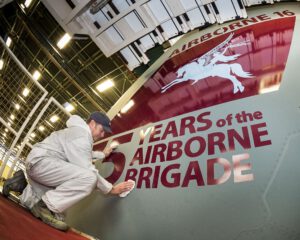 Pegasus has taken pride of place on the tail of an RAF A400M Atlas transport aircraft. The tail art celebrates the proud history and operational partnership between Airborne Forces and the RAF’s transport aircraft, as we work together on the exciting future with Atlas.

The aircraft is flown by LXX Squadron, which is based at RAF Brize Norton and is the first squadron to operate Atlas, which is set to become the backbone of the RAF’s transport fleet and play a key role in the Brigade’s future.

Collaboration between the RAF and 16 Air Assault Brigade to develop A400M capabilities is forging ahead. September 2016 saw the first A400M land on a dirt landing strip at RAF Rock Barracks, Woodbridge which had been designed and built by 23 Parachute Engineer Regiment. Development work on the use of the A400M for Parachute and Tactical Airlanding Operations (TALO) is ongoing. 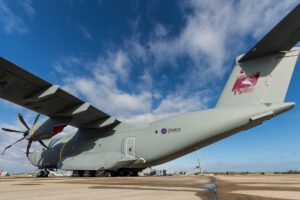