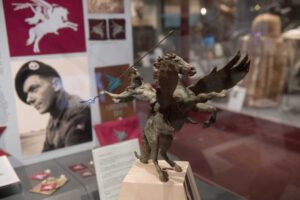 A working model of the Pegasus statue set to take pride of place in Merville Barracks, Colchester has gone on display at Airborne Assault – The Museum of the Parachute Regiment & Airborne Forces.

The full-sized statue, depicting the iconic symbol of the British Army’s Airborne Forces, will be unveiled outside Brigade HQ on 3 May 2017. It will serve as a reminder to today’s airborne soldiers of the proud history that they represent and the standards that have been set for them to uphold.

The project has been funded through charitable and corporate donations as well as fundraising activities.