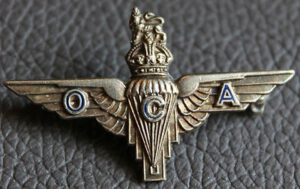 It is believed that the change of name was around the time of the presentation of ‘Colours’ to all three Battalions on Wednesday 19th July 1950. This was the date that the 1st, 2nd, and 3rd Battalions received their FIRST Kings and Regimental Colours from King George VI on Queens Parade, Aldershot.

The information we have is very limited and would like to hear from anyone who can add to the story.

Please message us using the contact tab or email: secretary@prahq.com  if you have any further information. 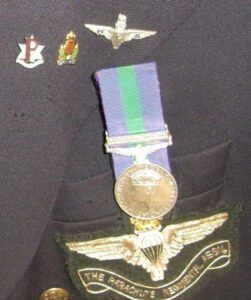 Tony Costello sent us this photograph of his original OCA badge together with the Palestine Veterans Association and the Intelligence Corps Association. Tony served in 2/3Bttn Palestine 1947-48 and Int Corps 1956-1961. Best wishes.

I had one of those back in the 1950’s and it was our wings with O.C.A across the front of it, before that the OCA was called the Parachute Regimental Association. On my original Membership card to this association the Heading is Parachute Regiment and under that in big black Letters is Old Comrades Association, hence the letters on the badge.