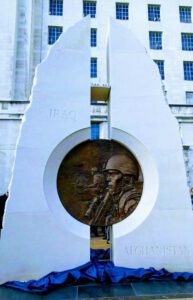 A memorial dedicated to those who served in Iraq and Afghanistan has been unveiled by the Queen in central London.

The £1m monument was funded by a campaign by the Sun on Sunday newspaper. The memorial is intended to commemorate all those who served and died in the conflicts.

MoD officials said the sculpture also honours the duty and service of British citizens involved, including those …who worked on the humanitarian side of operations.