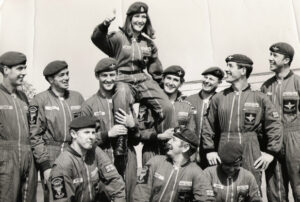 Female students at the University of Exeter were urged to aim high on International Women’s Day – quite literally.

She went on to be one of the top skydivers – male or female – in the world, winning the 1978 world championships with a perfect score. That feat landed her in the Guinness Book of Records.

Jackie told the Exeter talk that she had no problems fighting for equality – she was at least as good as her team-mates.

“When I was first invited to join a lot of men in the Red Devils Team , though not the Parachute Regiment – some might have thought having a female in the regiment diminished their masculine image”.

“But my parachuting skills were on a par with the men, if not better.” 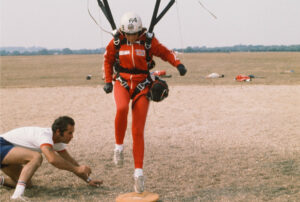 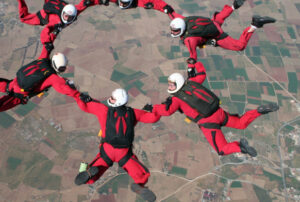 The Red Devils are part of the Army’s public relations effort, and having a woman on the team gave that a boost. But one event pushed her profile even higher. The team went to Swansea to jump into an event.

On the first day, as she went to jump her pack hit the top of the aircraft’s door and bent and jammed the ripcord pin.

Her reserve parachute only half deployed and she plummeted to earth dangerously fast.

“I fell into Mumbles harbour,” she said. “I don’t think I would be talking to you now if I had hit the land.”

But she did hit the national headlines. The next day the showground crowd had swelled from 5,000 to perhaps 80,000.

Jackie had joined the Army in 1971, with the Women’s Royal Army Corps, which no longer exists.

Jackie caught the skydiving bug after watching members of the Parachute Regiment training.

She was the first female to be awarded the red beret, in 1973, and went on to represent the Parachute Regiment at military competitions around the world.

She told the women at Exeter: “If you want to do something, chase your dream. I’ve had to work hard for mine.

“I’ve held down two jobs and gone without to raise the money to go away for competitions because I wanted to achieve something.

“It doesn’t matter if you’re not awesome – just find your passion and let that shine through.”

She has not jumped for three years because of knee surgery, but says parachuting can be open to any age, particularly with the opening of indoor skydiving centres.

She has now published a book about the exploits: ‘Marooned’.

The title is a play on the colour of the Parachute Regiment berets, and the fact that she was the only woman “marooned” in a sea of berets.