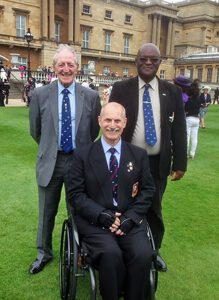 Rochdale Parachute Regimental Association has been awarded The Queen’s Award for Voluntary Service.

The Queen’s Award for Voluntary Service is the highest award given to local volunteer groups across the UK to recognise outstanding work done in their own communities. It was created in 2002 to celebrate the anniversary of The Queen’s coronation. It is the MBE for volunteer groups.

Chairman Wayne Rostron said: “I’m immensely proud that we have been awarded the Queen’s Award for Voluntary Service. I believe we are the first of all veteran airborne forces associations to receive this honour.

“I would like to congratulate members of the branch and all the volunteers.”

The Parachute Regimental Association was originally formed as an Old Comrades Association at the end of World War Two, to organise functions and activities for members to continue associations formed during their service with the Regiment and Airborne Forces.

The charity aims to support those who are serving or have served by fostering esprit de corps and maintaining contact between past and present members, help members or their dependants who are in need, hardship or distress, and to commemorate and remember members of the Parachute Regiment and Airborne Forces who have died whilst on active service.

The Rochdale branch, one of 89 association branches nationwide, predominantly helps paratroopers and their families, but help any and all veterans from any of the forces with issues such as homelessness, benefits, disability adaptions and also help those with unseen illnesses.