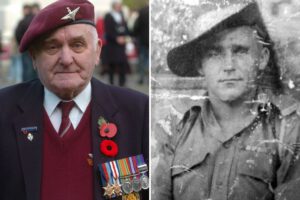 A Geordie soldier is to receive one of France’s highest honours for his heroism on and after the D-Day landings during which time he was shot and wounded twice yet still returned to active duty.

Billy Ness, 91, is to be presented with the Chevalier Légion d’honneur on Tuesday 31 January 2017 at a ceremony being held at the Royal Engineers Reserve Unit in Debdon Gardens, Newcastle.

In the letter to Billy about the award, the French Ambassador to the UK, Sylvie Bermann, wrote: “As we contemplate this Europe of peace, we must never forget heroes like you.

“We owe our freedom and security to your dedication, because you were ready to risk your life.”

Billy was just 19 when he parachuted into France in the first minutes of June 6 1944 with the 12th Battalion as part of ‘Operation Tonga’.

The battalion was first tasked with securing the village of Le Bas de Ranville which they did successfully until relieved despite being bombarded with heavy mortar and artillery fire, whilst repelling two German counter-attacks by the fearsome 125th Panzer Grenadier Regiment.

On June 7, it held a defensive line protecting the bridgeheads south of Ranville when they came under attack by eight Panzer IV tanks and an infantry company of the 21st Panzer Division.

On June 9 Billy took part in an assault on the village of Honorine la Chardonnerette during which he was wounded and returned to UK to receive medical attention.

He returned to the battalion and served in the Ardennes, before parachuting into Germany and still has a bullet in his leg where he was shot as he crossed the Rhine. He also served in North Africa.

Billy, who will shortly be 92 and lives at Theresa Russell House in Heaton, Newcastle, said: “It is a great honour to get this medal. I’ve been presented with a lot of medals over the years but they were all just because I was there.

“This is an honour for something I’ve actually done so in that way it will mean more to me than any of the other medals.”