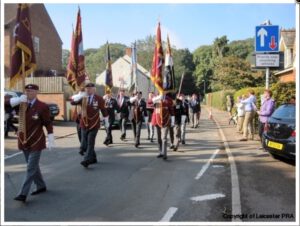 Following the changes in restrictions the annual parade in Somerby has been re-scheduled.

The parade will form up at 10.15 move off 10.30 followed by the church service at 11.00 – for more information and to help with expected numbers, to state your intent please contact  derekpeters@ntlworld.com

The Leicester Branch and the villagers of Somerby have held a Memorial Service and Parade in the village of Somerby, (which is near to Melton Mowbray), every year since the Branches inauguration in 1947, dedicated to all those men of Arnhem who paid the ultimate price.

These included the men of the 4th Parachute Brigade, who were billeted in the surrounding areas of Leicestershire and Rutland.

The men of the 156 Parachute Battalion, (said to have suffered the greatest losses of any of the units involved in the battle for Arnhem).

The 10th Parachute Battalion whose headquarters were in the village of Somerby itself and the 11th Parachute Battalion billeted near to Melton Mowbray. These men not only fought side by side in the battle of Arnhem woods but also in the final battles for the perimeter of Osterbeek. The Battalions became indistinguishable as the men left the vulnerability of the houses, that were being systematically destroyed by the German Panzers, and took to fighting from trenches in the gardens, taking orders from anyone that was put in command regardless of unit.

Past years have seen the number of Association standards falling at the Somerby Parade. Last year the Leicester Standard was present in support at several locations, Bedworth, Nottingham, Woodhall Spa, Loughborough, Hardwick Hall, Arnhem. It is the intention of the Leicester Standard to support the Branches of the Parachute Regimental Association this year also, whenever possible and practical, it will be there, that is why we are asking for your support in Remembering the men of Arnhem, and the men of the 4th Parachute Brigade.