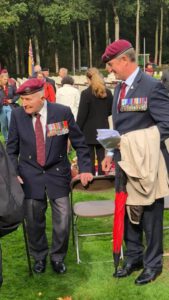 When the order came to leave Arnhem, SSgt Laurie Weeden of the Glider Pilot Regiment and two others headed to the river Rhine. They had been told there were boats to take them across but could not find them. They started to swim but one of them was struggling with the strong current. They all turned back, helping him to get back to the bank. He headed off in search of the boats, while Laurie and the other man started the swim again. Amazingly, two days later they met up with the third man in a Canadian Aid Station.