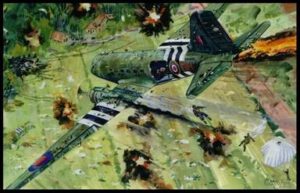 Dakota FZ626 arrived at ‘V’ around 16.30 pm local time. FZ626 descended to 500 ft (150m) at a speed of 120 m/ph (190 km/h), to be able to safely drop its load. It got caught in the fire of the German guns, being the first Dakota of this run over ‘V’ to be fatally hit. Instead of turning the aircraft away from the gunfire, Len Wilson decided to steer the crippled aircraft straight in the direction of the German guns. He just overshot his target. The aircraft came down right behind the positions of the 20mm Flak, crashing on a house (Bakenbergseweg 262), cutting some birches in half, only 5 feet above the heads of the German gun crews.

Though just missing the gun batteries, the explosion of the aircraft and the fuel in the panniers caused a huge turmoil among the gun crews. The German gunners were seen leaving their positions in a state of panic. Together with Len Wilson and Herbert Osborne the crew members Reginald French, James Grace and Richard Newth were killed in the crash of FZ626. Gaydon, Dillworth and Jenkinson left the burning aircraft in time, using their parachutes. They were taken prisoner by German soldiers.

One of the damaged birches is still present today at the Bakenbergseweg on the location where the Flak was situated. This tree is a silent testimony of the bravery of the pilot, clearly showing where the aircraft hit the crest of the tree. The courageous men who died on this spot are remembered by a green quartzite stone, placed in the eastern corner of drop zone ‘Victor’, some 50 yards from the birch and the house where FZ626 crashed.

Full details of the Dakota can be found at the dedicated website:https://www.fz626.com

The ceremony will take place on Friday 21 September 15.00 hrs Location : Bakenbergseweg 262, 6816PE Arnhem ( North )If you are at Arnhem this year and able to attend this new ceremony, the organisers would be grateful for your support.