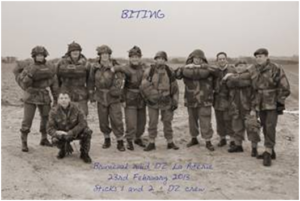 In February 1942, men of the newly formed British 1st Airborne Division went into action for the first time. In one of the most daring raids of the war, they seized and brought back to England, vital components of a German ‘Wurzburg’ radar installation.

The unit chosen for the operation was C Company of the 2nd Battalion of the 1st Parachute Brigade – 120 men commanded by Major John Frost. Nearly all the men were drawn from Scottish regiments, including the Black Watch, Cameron Highlanders, King’s Own Scottish Borderers and the Seaforths. They were to be accompanied by a technical expert, an RAF radar operator, Flight Sergeant C.W.H. Cox. His job was to identify the components needed and to remove them from the Wurzburg. Cox, a former cinema projectionist, was ill equipped for such an operation. He had never been in a ship, on an aircraft before.

The plan for the operation was simple. The paratroops were to be dropped in three units. The first under the leadership of Lieutenant John Ross and Lieutenant Euen Charteris, was to advance on, and capture the beach. The second, subdivided into three sections and commanded by Frost, was to seize a nearby villa and the Wurzburg and the third, led by Lieutenant John Timothy, was to act as a rearguard and reserve.

Two men were killed in the operation and six were missing, all of whom survived the war. Two German prisoners were brought back, one of them the Wurzburg’s operator. The German report on the raid commented: ‘The operation of the British Commandos was well planned and executed with great discipline although attacked by German soldiers they concentrated on their primary task.’ The raid had been a great success due in large measure to the element of surprise’. Even while reading an account of the action in a newspaper the Supply Officer of the Glider Pilot Regiment, whose training area the paras shared, did not associate them with the raid. 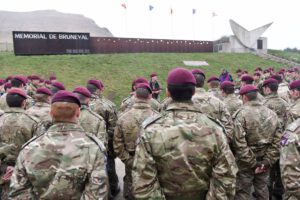 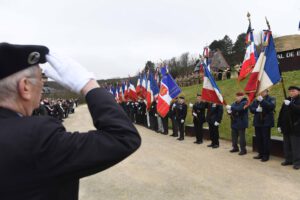 Paratroopers from C (Bruneval) Company 2nd Battalion The Parachute Regiment joined with French dignitaries and veterans for a service to commemorate the 75th anniversary of the Bruneval Raid. 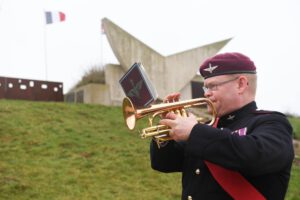