The Museum of The Parachute Regiment and Airborne Forces

Airborne Assault is the Regimental Museum of The Parachute Regiment and Airborne Forces and tells the stories of the soldiers who go to war from the air.

The Parachute Regiment and Airborne Forces played a central role in some of the most dramatic and heroic battles of the Second World War, including the Bruneval Raid, Normandy and the legendary operation to secure the bridge at Arnhem.

Airborne Assault traces the history of the Parachute Regiment and Airborne Forces from its inception to the present day, including operations in Afghanistan. Providing an insight into how today’s highly trained paratroopers are at the heart of 16 Air Assault Brigade, the Army’s rapid response force.

The story is told using imaginative displays of uniform and equipment from medals, weapons and even one of many ‘ParaDogs’ that were dropped into the battlefield all with historical and contemporary film footage and original sound recordings

Airborne Assault is situated within the Airspace Hanger of the Imperial War Museum Duxford. For groups of 10 or more, PRA/Servicemen are entitled to free entry with smaller groups being offered a “two for one” offer. To make a booking and for full details please contact the Curatorial Team for these and other offers.

Duxford is Europe’s premier aviation museum – as well as having one of the finest collections of tanks, military vehicles and naval exhibits in the country. The site is over a mile long and contains exhibits of the Battle of Britain, Land Warfare as well as Duxfords wartime role as a fighter station. In addition, there are two restaurants on site and a gift shop for the Imperial War Museum.

They kindly presented a cheque, as a donation, to help the museum continue its work along with a painting of the balloon cage. 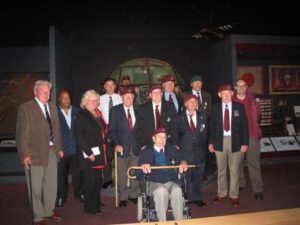 Open every day from 10am, including Bank Holidays

Opening times for the Winter are:

Opening times for the Summer are:

The archives of The Parachute Regiment and Airborne Forces are also stored on site.  If you have an historial enquiry, please initially check our helpful hints sections

Curatorial staff can be contacted at: enquiries@paradata.org.uk