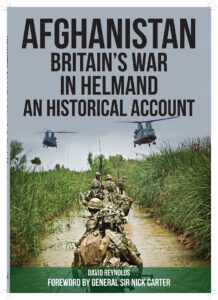 To mark the end of Operation HERRICK, DRA Books have published the first historical account of the war in Helmand. It reflects on the situation in Afghanistan in 1999 and the attacks on the USA. The intervention by Coalition forces and the deployment of British military forces into Bagram, Kabul, Kandahar and Helmand  In ten chapters it covers all the regiments and Corps who deployed and pays special respect the men and women who made the ultimate sacrifice. The book closely documents the role of The Parachute Regiment, who were the first unit into Kabul and elements from 16 AA Bde were also deployed to Bagram. As the campaign expanded UK forces were based at Kandahar and then in 2006 the regiment was the first into Helmand. The book is A4 in format and includes a foreword by General Sir Nick Carter, the Chief of the General Staff.

The book retails at £25 and is available to all members of the PRA  at the  discounted price of £20 including postage.

TO ORDER : Please email office@dramedia.co.uk with card details or call direct to order on  01752 403333 or send cheque (£20) to the address below. An order form is attached.