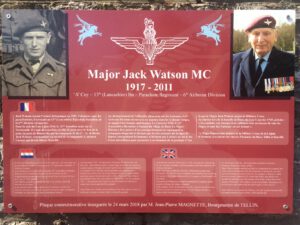 The Remembrance pilgrimage this year was formed of one Veteran (8th Midlands Battalion) and one veteran (3 PARA Sqn RE) as well as family and friends. This included four daughters of the late Major Jack Watson MC (13th Lancashire Battalion) and 15 other members of the Watson family. RHQ PARA was represented by the new Regtl Lt Col (Liam Cradden MBE) and the National Secretary of The Parachute Regimental Association. The National Standard Bearer was also present along with the appointed Regimental Bugler. Mrs Sally Warner, the daughter of the late Major Jack Watson was the tour guide for the weekend.

24 March This year was an extra special occasion at Bure as they had chosen to rename the square after Major Jack Watson MC. A large crowd gathered at the memorial to the 6th Airborne Division and the 13th (Lancashire) Battalion, The Parachute Regiment. The Bourgmestre de Tellin, M Jean Pierre Magnette welcomed everyone to Bure. The PRA Secretary conducted a short the service of remembrance which was followed by the wreath laying ceremony at the Memorials for those who fought in and around Bure along with supporting arms to liberate the village during the 3-5 January 1945. During the Act of Remembrance the Regtl Lt Col read Binyons words and the Last Post was played by Stuart McNair. This was followed by a minutes silence, Reveille and the National Anthems. Wreaths and flowers were laid by the Veterans, daughters of the late Major Jack Watson MC, the Bourgmestre a 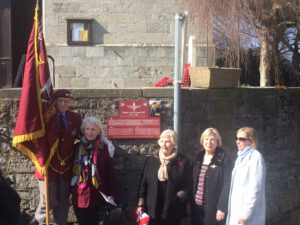 The Bourgmestre then conducted the unveiling ceremony of the plaque to commemorate the renaming of the square. Ralph Bennet of Tours International read out the citation for Major Jack Watsons MC in French, followed by the PRA Secretary in English. The daughters of Major Jack Watson MC then unveiled the plaque. 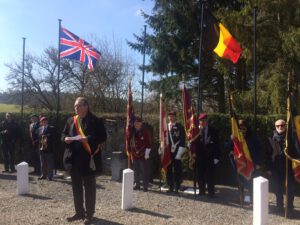 Many of the crowd then moved to conduct a short Memorial Service at the Croix Renkin, which was led by the current CO of the Belgium SAS and members of the Belgian SAS Association. Wreaths were laid by the CO and Belgium SAS Veterans, the BA and finally the 8 PARA veteran, who was escorted by the Regtl Lt Col. The Regimental Bugler played the Last Post and Reveille and National Standard Bearer was present at both ceremonies. 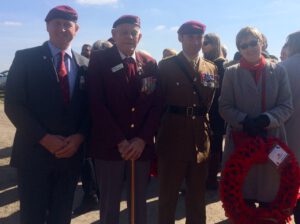 All parties then attended lunch, hosted by the Bourgmestre at Bure Salle des Fetes. 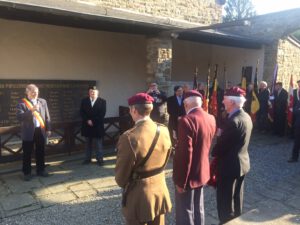 The day ended with the Remembrance Service in the village of Bande. The party joined the people and Belgian veterans of the village of Bande at the Memorial to the 34 men who were killed by the Gestapo, Christmas 1944. The Bourgmestre de Nassogne, Marc Quirynen together with the Regtl Lt Col laid wreaths in their memory along with the veterans. Last post and Reveille was again played by the Regimental Bugler as the National Standard was lowered. This was followed by a thank you Vin d’honneur by the Bourgmestre for the close friendship of the veterans of the 6th Airborne Division.

25 March The day began at the Commonwealth Cemetery in Hotton, where the group were invited to lay a small wooden cross on the grave of one of those buried there. We were joined by the Bourgmestre de Hotton, Jacques Chaplier, along with a small number of local people and Belgium Standard Bearers. The National Standard Bearer was also present as well as a number of Belgium Standard Bearers. The PRA Secretary again conducted a short service and those gathered joined together for a simple wreath laying ceremony in memory of the fallen. Wreaths were laid by the Veterans along with the Regtl Lt Col, followed by flowers by the Bourgmestre. Binyons words were read by Tom, the Son of Lt Col Luard (CO 13th Battalion) and The Last Post and Reveille was played by the Regimental Bugler. The end of the ceremony was signalled by the playing of the National Anthems via a sound system. The group were then invited to a Vin d’ Honneur with the local people, after which they thanked everyone for their kindness and hospitality. 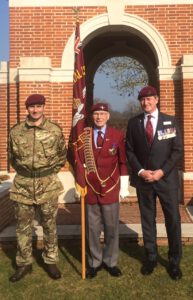 During the afternoon the group enjoyed a visit to the local Musee de la battaile des Ardennes which is the only Battle of the Bulge museum to present a British section.

The group then spent the rest of the day visiting the lone graves of men of the 6th Airborne Division who rest in peace in communal cemeteries away from the cemetery. Flowers and a wooden cross were laid on each grave in their memory.

26 March The group departed the hotel for the return trip. 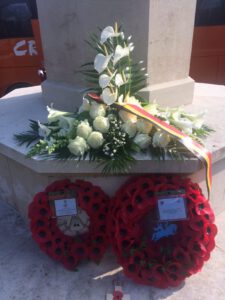 In conclusion, this would not have been possible without the support of the Chairman and Trustees of the Airborne Forces Security Fund who provide invaluable financial support to the veterans and their families and helps enormously towards making this weekend possible. On their behalf, I thank you!