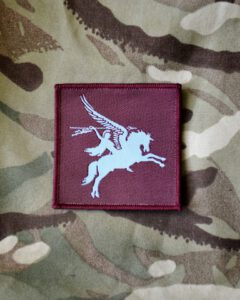 16 Air Assault Brigade was formed on 1 Sept 1999 from two pre-existing formations, 5 Airborne Brigade and 24 Airmobile Brigade. Based in Colchester, Essex, the Brigade Headquarters is formed from both Army and RAF personnel enabling it to integrate Air and Land operations.

Following Army 2020 restructuring, command of 16 Air Assault Brigade was transferred from Joint Helicopter Command to the British Army, and the Pegasus emblem returned as the symbol of British airborne forces on 25 November 2015.

The Brigade HQ is based in Colchester Garrison and was under the operational command of the tri-service Joint Helicopter Command (JHC). For administrative purposes, it is under the control of 5th Division, now Support Command. As of September 2015, Commander Land Forces assumed operational control of the brigade.

16 Air Assault Brigade is the British Army’s airborne rapid reaction force, specially trained and equipped to deploy by parachute, helicopter and air-landing. Its core role is to maintain the Air Assault Task Force, a battlegroup held at high readiness to deploy worldwide for a full spectrum of missions, from non-combatant evacuation ops to war fighting. It is at the forefront of developing interoperability with the US Army’s 82nd Airborne Division and the French Army’s 11e Brigade Parachutiste.

Recent years have seen the Brigade’s soldiers deploy multiple times on operations in Iraq and Afghanistan as well as supporting civilian authorities in the UK.
Units and elements of the Brigade